Smash Into You Review! 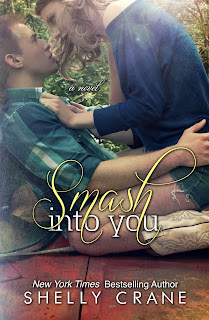 Smash Into You by Shelly Crane

His whole life, Jude Jackson has been on the run. His mother's last words were "Never Stop Running", so he's done just that. Going from one town to the next, pretending to be in high school or college, using a different last name in every place, taking small bit jobs to get by and never getting close to anyone so that "Biloxi" doesn't have the extra target.

One day when he comes out of work, he finds a girl in cowboy boots and cut off shorts has smashed into his truck, both of them agree to just take care of their own vehicles because neither can afford to deal with insurance companies or any other headaches. They part ways, but life keeps bringing them back together at every turn.

When Jude takes his boss out to drink and try to forget about his wife with a wandering eye, there Marley is again, the waitress at the bar they go to, and its at that bar that Biloxi once again finds Jude and nearly takes Marley out with his car but Jude saves her and at the same time puts her whole life in danger because she is now forced to go on the run with him.

On their journey, they run across dangers courtesy of Biloxi and his men, illness and the kindness of a farmer man. Also, love.

One of the times that Biloxi is chasing them, Jude gets smart and snaps his picture and uses the internet to find out who he really is and what he discovers shocks him and Marley, and to top it all off they discover they have a matching scar that connects them both to Biloxi and his BioGene company that neither of them ever thought they had been a part of. Their mothers both unwittingly put them into the hands of monsters but were able to escape but BioGene was always on their heels.

Armed with the new information, they are able to bust in and learn more about their own forgotten pasts and release thousands of mothers and childrens from BioGene's grasp once and for all and eventually, are able to start on their own future, together, no longer on the run.