Meant For Her Blog Tour and Giveaway! 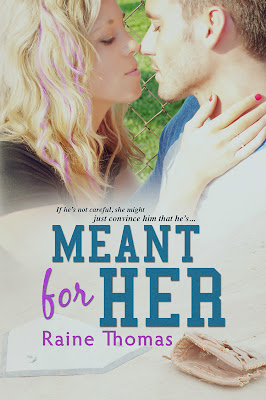 His best friend's wedding brought Evan Dorsey back to his hometown, a town filled with memories of his mother who recently passed away due to breast cancer, and the home of the baseball team that he's eager
to become a part of and play on the field that his mother always wanted to see him on. Evan thinks once he's fulfilled that dream that he can leave Atlanta behind once and for all, but he didn't expect to meet Sierra and for her to worm her way into his heart.

Sierra knows as soon as she sees Evan that he is meant for her, everything in her gut lets her know it, even when he is being a jerk to make her run off, but she never gave up on him. I really loved these two, and they had a lot of craziness to deal with. There's someone who keeps sabotaging Evan and that someone leads danger straight to Sierra, but in the end that brings Sierra and Evan closer because it makes him break down the wall he's built around his heart and lets him finally let her in and realize that really are made for each other.


About The Author
Raine Thomas is the author of bestselling Young Adult and New Adult romantic fiction, including the award-winning Daughters of Saraqael Trilogy and Firstborn Trilogy. She is a proud member of Romance Writers of America and is a contributing blogger to The Writer's Voice. When she isn’t planning weddings, writing, or glued to social networking sites, she can usually be found on one of ’s beautiful beaches with her husband and daughter or crossing the border to visit with her Canadian friends and relatives.