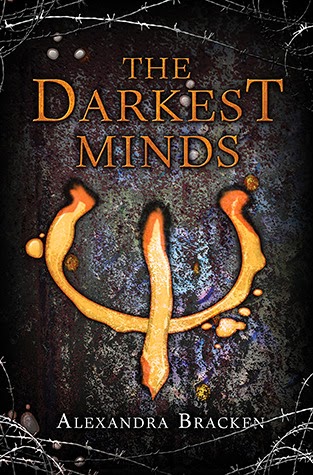 *This review was written by our guest reviewer Debora L. Poco*


So I was very excited to start The Darkest Minds because I watched a few reviews about it on YouTube and everyone seemed to love it. I have to say that it was much more amazing, fast pace and exhilarating than I expected. This book starts off at the very beginning of it's dystopian/post apocalyptic world. The female protagonist Ruby is ten years old in the beginning of the book which is when kids between the ages of ten and fourteen either die or start developing abilities such as telekinesis and high I.Q. after a plague/disease called IAAN breaks out in the U.S. Ruby is one of the surviving kids and starts developing an ability and the problem is her power will affect her whole life and the ones she loves the most. All Psi kids (name given to kids with abilities) are taken into rehabilitation camps created by the Government to help "cure" them and Ruby is no exception.She is sent to Thurmond's rehab camp after her parents locked her in their garage and called the authorities for something that is beyond her understanding at the time. On her first day at Thurmond every kid goes through a test to determine what their Colour is, yes that's right! There are five colours (kind of like Districts in THG or Factions in Divergent) and those are; Green which are basically very intelligent kids or I should say; with a higher I.Q. than average people. Then there are the Blues and those are the kids that have the coolest ability in my opinion and that is telekinesis (capable of moving objects with the power of their minds alone). Now the danger starts with the Yellows and those have control over electricity/electronic devices. There are also the Oranges that are the most dangerous of the five Colours (in my opinion) and those are capable of mind control/influencing people. And the last colour is Red also very dangerous since they can control and create fire. Ruby spends six years living a life she never expected to live, however everything is about to change when she is sixteen years old and an amazing adventure awaits her beyond the walls of Thurmond's Rehab camp. With the help of The Children's League Ruby escapes and just when you think things are headed in one direction Alexandra Bracken laughs out loud and you are left with your jaw hitting the floor. And no I will not tell you what Colour she is but she will meet the most amazing group of friends in her crazy, full of feels and adrenaline packed journey after her escape from hell . This is where things get even better. Ruby meets Liam, Chubs and Zu and I absolutely fell in love will all these characters instantly! Liam is the amazing good looking leader/hero/male protagonist/love interest in this book and i can say that he will sweep you off your feet with his charming personality and sexy accent. :) Chubs is a smart ass, basically. Very sarcastic and a loyal friend! Zu is just the sweetest girl and i honestly love Alexandra Bracken for creating this specific character, she did an amazing job keeping the readers very aware of Zu and you will find out why when you read it.
So Ruby, Liam, Chubs and Zu go on a journey based on rumors of a safe haven for Psi kids called East River and a kid that goes by the name of Slip Kid and that's what/who our amazing group of friends is looking for, each character is headed towards East River not only for one specific reason but also for their own personal reasons. Later we are introduced to something very unexpected. As for the end of this book all i can say is: totally unexpected! Alexandra Bracken is amazing and her writing is phenomenal.
I give The Darkest Minds a 5 out of 5 stars not only because of the author's writing but also for the world building and all the characters and their development throughout the book, there were funny scenes and let's be honest, what's a book without a little comedy? or sarcasm to break the ice?
I tried to keep this review as spoiler free as possible by not revealing too much, not even the character's abilities/Colour. I hope you enjoy The Darkest Minds as much as I did.
Buy this book:
Amazon
Novella
Book 2